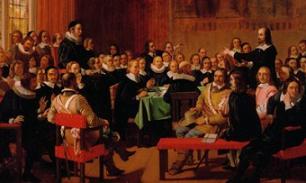 Our beliefs are deeply rooted in the inspired word of God.  The Bible is our only rule for faith and practice and therefore defines both what we believe and how we live.  The Protestant Reformation of the sixteenth century rediscovered many Biblical truths that had been neglected for centuries.  By recapturing the authority of the Scriptures, the Reformed Churches returned to loving God with heart, soul, strength and mind, and to loving neighbor as ourselves.

A mature statement of Reformation commitments is found in the Westminster Standards – the Confession of Faith and the Larger and Shorter Catechisms.  Composed in the 1640’s in Puritan England, these documents are the high water mark of the Reformation.  In short, our church believes in:

Fallen mankind is dead in trespasses and sins, but God is rich in mercy.  In His amazing love, He has chosen out a people for Himself through Christ in eternity past.  In the fullness of time He sent His only begotten Son to live, to die and to rise again for the salvation of the elect.  What Christ accomplished, the Holy Spirit effectually applies as He regenerates and sanctifies sinners into saints.  Because God perseveres with us, we will persevere with Him.

The Bible is the story of God’s redemptive purpose, centering on the incarnation, life, ministry, teaching, miracles, sufferings, death, resurrection and ascension of Jesus Christ.  Through the completed obedience of Christ, God has purchased men for Himself.  We now belong to Him as adopted children in His family, and as citizens in His glorious kingdom.

Another major feature of our Reformed beliefs is a concept of the covenant.  Although men owe obedience to their Creator, they could never enjoy a right relationship with Him apart from a voluntary condescension on His part.  God is pleased to stoop to man and deal covenantally with His creatures.  All men are in covenant with God, either through Adam in the covenant of works, or through Christ in the covenant of grace.  In the new covenant we experience the full measure of God’s covenant love.  In brief, we are His and He is ours and His banner over us is love!  Our lives are henceforth to express grateful obedience, leading us to ever deeper fellowship with Father, Son and Holy Spirit.

Because of God’s mercy and grace, we are made alive together with Christ.  As our first response to His sovereign initiative, we repent of our sins and embrace Jesus Christ as He is offered to us in the gospel.  Being united to Christ by faith, we enjoy justification.  Our sins are imputed to Christ, and His righteousness is imputed to us – we are accepted in the Beloved!  We are also adopted into His family and made “co-heirs together with Christ!”  He sanctifies us – both definitively and progressively.  Slowly but surely we are remade according to the image of our Savior.  And eventually we will be glorified and invited into the full enjoying of God for all eternity.  He who began a good work will continue it until the day of Christ.


Covenant Life Presbyterian Church is  church plant of the... (more)